The following review by Lil Copan appeared in the Christian Century Art Column, September, 2011
This review was based on the image "Impact" and is characteristic of John's earlier "naive" style of painting. ​ 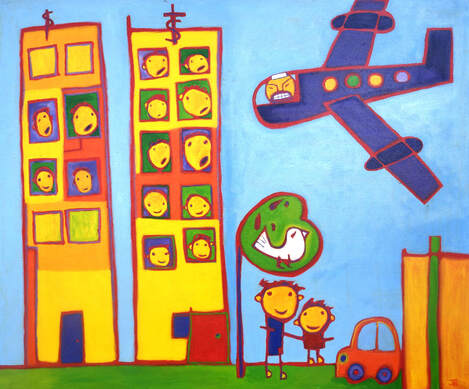 Nearly every website, magazine, newspaper, blog, and Twitter account in the months and weeks approaching September has honored the losses, remembered the events, “collected memories,” and explored the terrain 9/11, looking for a new understanding.

Bringing his signature gifts as an artist, Australian John Freeman has created his own record. “My family and I watched these events unfold in real time from the comfort of our lounge room and the other side of the world, in Australia. We were like the rest of the civilized world - shocked and horrified at what took place before our very eyes. A planned, systematic act of killing random, innocent, individuals with such precision, in the name of God, was beyond belief.”

Claiming a line of artists that have gone before as his mentors--Van Gogh, Matisse, Klee and Chagall, but, he says, “the greatest influence is the work of the children I taught while I was a school teacher.” 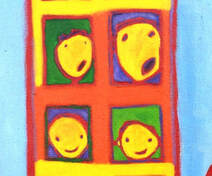 His “child’s” eye, brings immediate experience and directness, that he claims “enables an honesty and clarity which is often lost in sophisticated Western Art.”  Yet his writings move toward depth, as with his comments about “Impact”:  “The twin towers were significant to the New York skyline and in a sense symbolized the ingenuity and might of man and man’s empire, driven and sustained in most cases by the dollar and the creation of wealth. The dollar sign symbolizes this capitalist system and of course the cross represents Christianity. Together they symbolize “The West” - an ideology that is abhorred in many parts of the world but has delivered significant social benefits over many generations.” 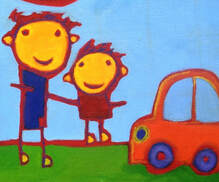 ​Often Freeman comes to his paintings exploring the gospel texts or local culture and neighborhoods, churches and familiar narratives: blessings, births, wanderings, doubt, losses, reconciliations. And within each narrative—and this work is no exception—we meet this recurring moment: a small white bird.

“I have used a bird as a symbol of ‘God’ or the Holy Spirit,” he writes. ”It is the ‘otherness’ beyond the human experience that pervades all things. The bird is beautiful, fragile beyond man’s control and dominion. It possesses qualities man does not – freedom of flight, and like God, observes all things from a different perspective, seemingly in an impartial and non intrusive way.”

What Freeman does with his seemingly simple palette, his reliable narrative lines, his framed faces at each window—bizarre or happy or earnest or forward-facing—is bring all of us into utter simplicity to two things: a devastating moment and a bird of heaven in witness and presence and fragility.