​John Freeman and his work
John Freeman has long been a skilled communicator, first as a school-teacher, then in internet technology and now as a visual artist.
All this experience has brought out his natural gifts as an image-make and story-teller. He says he has learned a great deal from his students which is true of all fine teachers. In John’s case it has given him a deep feeling for the highly-expressive visual images of young children. This work is always so direct, honest, unaffected and vivid. Their palette is usually restricted to primary colours (the poster paint colours most schools provide!) and colour has no necessary connection with the objects specified. Emotional tone is dominant.
But it is the images which have so much to teach. Children are natural abstractionists if not caricaturists. Their stick figures often have the emotional power of a Paul Klee as they express their deeply-felt response to a particular story or personal family situation. In the same way people recovering from various mental illnesses often express their deepest feelings most vividly through their paintings or sculpture. Sometimes their expression in this way can be a major step in their movement towards stability and hence healing.

John Freeman’s imagery is much more approachable. Most of his images are instantly recognisable, sometimes with powerful emotional responses welling up from within us. He is careful with his titles too. They are always indicative and helpful. In this way the story reaches out to us with significant impact.

This is not to say that they are always easy to interpret or seem simplistic. John has some symbols of his own and, once known, they enrich our understanding. His birds, for example, are not mere decoration or tacit observers on the scene. They often act as commentators, or, indeed, as critics of a particular pattern of behaviour. Nor does their benign white make them always benevolent.John is a true modernist. He has learnt much from Matisse and others who set colour free in the twentieth-century to be the unique language it has always been in embryo. He does not allow visible realities to control his use of colour. Sometimes his sky is yellow if he thinks it enhances the story-telling capacity of the image.

And, like other modernists, he has a range of images or forms which are part of his own vocabulary. He loves the circle, a sure sign of a believer in God .Frequently a portentous hill rises behind his figures to give gravitas to the scene. It is almost as if the heavenly host is keeping an eye on things from afar.
​
It might appear that John Freeman is a naïve artist. But that is far from the truth. With his vast experience of the educational and commercial worlds no one would describe John as a naïve person. Nor, with his professional training as an artist, could he ever be described as a primitive or naïve artist within the accepted meanings of the terms. 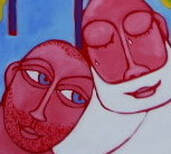 However, he does have something of the simplicity of the true story-teller: someone who can extract the significant barebones of a great yarn and represent them for a contemporary audience in a way which commands their attention. His paintings of refugees take us with immediacy and emotional impact straight into the centre of the appalling predicament of displaced people desperately clinging to each other in patent fear of the future.

It is clear that John Freeman has come a long way from his inevitable derivative beginnings to the confident assurance of his current work. We look forward to his future development with interest.